"When lawyers (judges) cannot be trusted to observe the fair processes essential to maintaining the rule of law, how can we expect the public to respect the process?"  "The American legal system has been corrupted almost beyond recognition"
- Judge Edith Jones of the U.S. Court of Appeals for the Fifth Circuit, told the Federalist Society of Harvard Law School on February 28 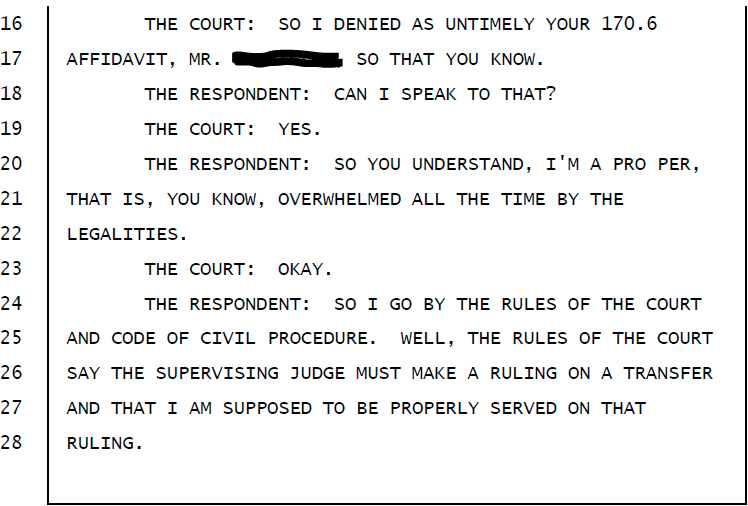 --Same 2/06/2015 Transcript Below - Judge Lewis indicates he "over ruled" his new boss and ordered the transfer to his new court - he acted in Excess of Jurisdiction...Then he committed perjury by erroneously misstating the facts - the fact is the Attorney Fees Trial had not begun, in "fact" he would delay the trial for another 8 months after the transfer!!  The "courts" egregious delays would incur a very high price tag - he not only "stuck to me", you (the tax payer) took a big hit too.

Excess of Jurisdiction
Only the "presumption" of bias is required for recusal.  Section 455, captioned "Disqualification of justice, judge, or magistrate judge," provides that a federal judge "shall disqualify himself in any proceeding in which his impartiality might reasonably be questioned."

2.  The rules of the court (the law) state only the Presiding/Supervising Judge can order a transfer/reassignment.  The notice to attorney's was sent via the Supervising Judge ordering Laura Lynn and my case to remain in the Central Division Court House with the newly assigned judge – clearly we were NOT to be transferred with Judge Lewis out of the proper jurisdiction.

3.  The rules of the court (the law) state an individual judge cannot unilaterally rule on a transfer, violation of this rule/law is an act in excess of jurisdiction.

4.  Judge Lewis was transferred/reassigned to hear Long Cause cases which neither Laura Lynn and my case qualify.

6.  After illegally transferring the case, Judge Lewis delayed the trial for 8 months.  Every delay/court continuation he requested further briefs and supporting documents which quadrupled the costs (he is a tax payers money pit).  The Fees and Sanction's trial begin in 2010 and he held it over me for 5 yrs (there was no question he was going to bludgeon me).  He already hammered me with over $90,000 in sanctions and gave all my assets to the Petitioner, this would be his 3rd and most mercilessness judgment - I will update the 2015 web page with details soon.

7. Two separate attorneys took the extraordinary steps to recuse Judge Lewis on my behalf, even the opposing counsel questioned why Judge Lewis hasn't recused.  There is nobody other than Judge Lewis' and his good o'l boys club who would not recuse him.

Create your own unique website with customizable templates.
googledb49ff4d8f033f44.html